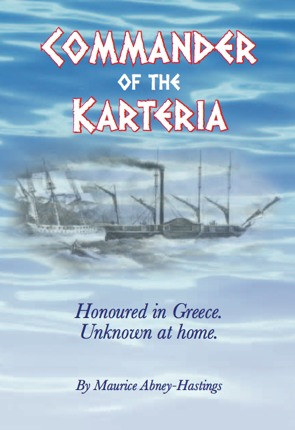 From participating in the Battle of Trafalgar as an eleven year old trainee midshipman to his untimely death as Commander of the very first steamship used in naval warfare, Frank Abney Hastings' life is portrayed vividly throughout this book. Born into a privileged aristocratic family, Frank Abney-Hastings had a potentially brilliant career mapped out in the British Royal Navy but, partly due to his own sense of honour and the political atmosphere at this time, it was cut short.

His passionate interest in artillery and early nineteenth century naval warfare, combined with his desire to participate in the Greek fight for independence from Ottoman rule, led him to become one of the most revered Philhellenes in Greece today. Set against the historical background of early nineteenth century history of the influence of the Turkish regime and the rise of other Philhellenes, including Byron, Hastings contributed to the Greek cause by designing, building and commanding the first steamship ever used in naval warfare.

The Karteria was not perfect but had many revolutionary aspects to her design. She became a great threat to the Turkish fleets and successfully sank and captured many ships. She and the legendary ‘Hellas’ became the first ships of the new Hellenic Navy.

Hastings' fatal wounding off Mesalonghi at the age of thirty four was a sad blow for the Greek cause but the Karteria remained to continue his fight.

In Greece Frank Abney-Hastings is remembered as a hero. If he had lived, he may have become England's next Nelson. The book describes his life, his tribulations and his successes not only in the author's words but also through Hastings' own correspondence and writings.

Maurice Abney-Hastings was brought up in Leicestershire, the home of the main character in the book and now lives in rural Warwickshire near Stratford upon Avon. Maurice is the author of Big Days in Ashthorpe Magna (see www.ashthorpemagna.co.uk), the Pernod Book of Pétanque and many marine magazine articles. He has also written and presented TV programmes. Educated at Becket School, Nottingham, Southampton University, School of Navigation, and later a student of the late Professor Joan Hussey at the British School at Athens, he spent time as a Navigation Officer and subsequently in the marine industry. Maurice was a Research Fellow at Warwick University and is now involved in European research projects. In 2010, he was elected as a Fellow of the Royal Geographical Society. He was inspired to write this biography by the family, by his love of marine matters and by his own desire for Captain Frank and the Karteria to become more well-known outside Greece.