The photographs of the pistols have been taken by and shown by kind permission of their owner, Squadron Leader Darryl Plumridge.

The pistols are high-quality, percussion, 54 bore made by Isaac Riviere of 315 Oxford Street, London circa 1824. They have an octagonal barrel and are muzzle loading. They have platinum breech lines and a platinum breech plug, fine engraving and heavy damascus barrels.

The pistols are in their original fitted mahogany case which also contains some shot, reloading tools and a leather covered powder flask. The flask is divided into three compartments for powder, shot and percussion caps. The case lining is totally original and is a velvet material. The key escutcheon is ivory and an original key is also present.

Of specific interest is the brass inscription on the lid of the case which is engraved with the words “This Case of Pistols was bequeathed by Frank Abney Hastings Esq. to his Friend Captn E H Scott RN”

The calibre of Captain Hastings' pistols is smaller than that used in military issue of the time. Therefore in accord with normal naval practice, he would also have had the ship's inventory supply of pistols loaded and ready as a quick alternative to loading his own. 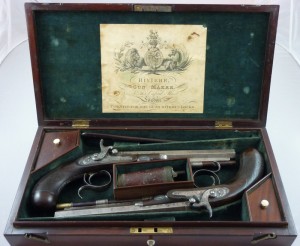 The pistols show heavy use in the period of Captain Hastings' life and were undoubtedly used in action as well as in duels (see London Times article below). There is no sign of use since they were left to Captain Scott.

Isaac Riviere worked as a gunsmith from 1818 to 1851. These pistols predate Riviere’s patent ( No. 5175) for a concealed lock in 1825 but have some of the characteristics of his patent lock. Whilst he was a gunmaker, Riviere joined the Honourable Artillery Company in 1821, became a Sergeant in 1829, a Lieutenant 1829–1833 and Captain of the Jager Corps 1833–1848. He organised a rifle range at Wormwood Scrubs and leased it to the HAC and the Royal Victoria Rifles of which he was Corps Treasurer.

Captain Edward Hinton Scott served with Frank Abney Hastings during his naval career and rose through the British Royal Naval Ranks to retire as Rear Admiral. 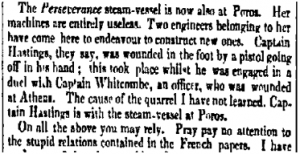 Extract from an article in The London Times; 5th October 1827