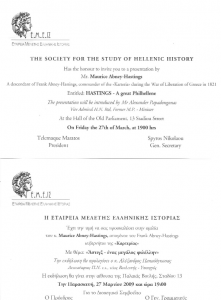 Click to Enlarge
May I first apologise to both our regular & new visitors for the delay in reporting on the Greek presentation. This is entirely my own fault, & taking on far too much since we returned. You can see from the Invitation issued by the Society for the Study of Hellenic History the importance they gave to this address.

The days leading up to the presentation were busy & varied – luncheon with the Club & Society heirarchy at the Hellenic Yacht Club; visits to my old friend Admiral Paloumbis at the Hellenic Maritime museum, meetings with the delightful publisher, Ari Caratzas & his wife, of course our greatest supporter in Greece, Micky Capaitzis plus many,many others. The morning of the presentation was spent at the venue, the Old Parliament House, which is now at the centre of the National Historical Museum minutes away from Syntagma Square at the centre of Athens. This was time well spent & allowed my son James, who had travelled out with us, to work with the museum technical staff making Power Point systems work with each other!

Click to EnlargeDespite the glamour & historical importance of the surroundings, nerves did not really crack in until visitors started to arrive. In the earliest groups were uniformed Naval Officers, & even a number of Officer Cadets from the training school. They all stood to attention when a uniformed serving admiral came in! They were in good company as a further 4 retired admirals were introduced, two ministers, Prime Minister‘s secretary & several ship owners. August company indeed. The President of the Society had explained that he would give a brief introduction & the greatest terror came during the 30 minutes this took! Once it started it went well, & many came up after to congratulate me, including a very old friend, Lilica Dimacoupoulou who is now the editor of ESTIA newspaper.

Many other groups, including a representative from the Army, asked if I would go back to Greece to present to them! I think you can guess the answer!

Perhaps the greatest reward was dinner for the officals & our own group of 5 at the Athens Club. I have never been into the Carlton Club in London, but I imagine it was much the same. Late in the evening we were being shown around, & most interesting their was a large, beautiful painting of the Leonidas owned by Tombazis & the second Greek ship on which Frank sailed after his arrival in Greece. A fitting way to finish a most enjoyable & worthwhile week.