In a blazing heatwave Maurice, Di & Peter went to Willesley ( near Ashby de la Zouch ) for a further meeting with Richard Liddington, the amazing Volunteer Warden of the Scout site based in what was the stable block at Willesley Hall. Whilst we had all met earlier, he had had several weeks to go through the archives to see what he could find. This even involved breaking into an old safe which had not been opened for years, but which revealed photographs, documents, plans & maps. Many of these are now being scanned & will at some point appear on this site. Since our visit a couple of months ago, Richard has worked tirelessly cleaning up the Church which was being used as something of a builders yard! He has done a terrific job for which I, & the many Abneys & Abney-Hastings buried there, truly thank him.

We were also very pleased to meet up with Mark Knight whose 4 × grandfather had taken on one of the farmes in 1841 as a tennant of Sir Charles Abney-Hastings, Franks older brother, & it was astonishing to sit with somebody whose connection goes back so far. The other truly amazing thing that when my father was a small child in the late 1890‘s he would have known Marks antecedents. The last of his relatives to live on the estate was his g-grandmother Jenny Knight who died in 1973. His family have been closely involved with the estate church in many roles. 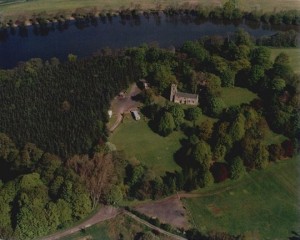 I couldn‘t let pass the superb picnic which Di had brought along for us! Thanks!

Only 3 miles to the south of Willesley is the once mining village of Measham. This is home to a remarkable lady, Mary Buckley, who is a family historian to the Abneys. She has nearly finished a book on the family which we will make available through this website, but equally as important she is involved with Measham Museum. They recently moved out of their previous building, & into a rather lovely ex-railway station which I have not seen before, so we took the opportunity to have a look. It looks within weeks of completion & is absolutely lovely. The most exciting thing is that they are diverting the Ashby Canal some 2 miles away to enable boats to travel down the old railway line & moor up at the museum. I understand that one half will be museum & the other a coffee shop & restaurant. I will keep you all informed when it opens, but I wish them every success.