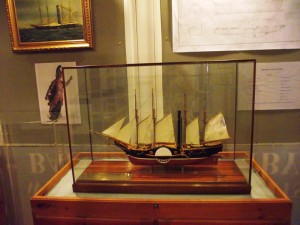 Throughout the month of June 2011 an exhibition took place at the award-winning Ashby-de-la-Zouch Museum on the Karteria and her creator, Frank Abney-Hastings’ who was born and brought up just 3 miles from the museum at Willesley Hall.

Clearly local interest attracted many visitors, many of whom had never heard of Captain Frank, but there was also a considerable interest from far and wide of not only those interested in modern Greek history, but also a number of lovers of all matters maritime. It achieved success in attracting namy visitors to Leicestershire, and indeed one couple who came up from London and stayed locally for a night enjoyed it so much that they booked in for a second night to explore the area. 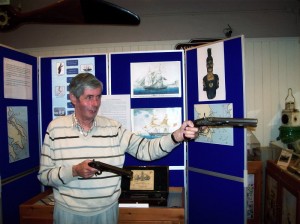 The display, largely put together by the author’s friend and agent, Dianne Williams with help from Kenneth Hillier and staff at the museum, was a great attraction, but two exhibits shone out. The Baltic Exchange in London had kindly loaned an historic model of the vessel presented to them in 1923 by the Greek shipping community and its photograph can be seen here. In addition Leicestershire County Museum loaned a model of HMS Victory on which Frank Abney-Hastings served for 4 years and received his first promotion to the rank of Senior Midshipman.

Then came the Captain’s pistols, the history of which can also be seen on this website!! Seeing them for the first timegave an especial pleasure to the author, Maurice Abney-Hastings who can be seen “playing” with his new toys before locking them away for safety! It was a moment for him to savour and he and the whole team are most grateful to Sqdn Ldr Darryl Plumridge for allowing them to borrow them for the month.

There is no doubt that the exhibition will be repeated next year, but it is not yet known whether this will be in London, Greece or even further afield. Naturally this will be announced ion this website.